The Gallery of Fine Art, Edison Community College, Ft. Myers Florida is pleased to present, “Realism from the Martin Z. Margulies Collection.”  This exceptional exhibit of paintings, sculpture, and photography will be open to the public from February 16th through April 1, 2001. The opening reception will be held in the gallery from 6 – 8 pm, Friday, February 16th.  Refreshments will be offered by the Docents of the Gallery, and Kat Epple will provide music.  Mr. Martin Margulies will also give a collector’s talk the evening of the 16th, from 7 to 8 pm.

Focused on the period since the pop movement of the 60’s, this exhibit features artists who have made significant contributions to the resurgence of realism and who have added insight into a broad range of concerns and approaches. Some of the artists included in this exhibit are Ralph Goings, John Salt, Deborah Butterfield, Christy Rupp, Max Ferguson, William Beckman, David Mach, Davis Cone, Julian Opie, Zadik Zadikian, Jerry Ott and Steven Warre.  Diverse in visual and conceptual identity, this exhibit, as a survey of ideas with realism at its core, offers glimpses of a range of concerns that have impacted artists in the latter part of the 20th Century.  From photo realism onward, the work in this exhibit is rich in visual texture (as in the Davis Cone paintings), grand in scale and sublime (as in the Deborah Butterfield sculpture), sometimes small and captured (as in the Steven Fox’s painting), or classical and juxtaposed (as the sculpture of Zadak Zadikian). Whether found and assembled, photographed and painted, exaggerated in scale or constructed, they all point to a tradition that is deeply rooted, richly varied, and powerful in imagination.  They represent the strength, vitality, responsiveness, perseverance and independence of realism.

The Gallery of Fine Art is pleased to have the opportunity to exhibit this selection from the private collection of Mr. Martin Z. Margulies.  It is through his generosity and commitment to education that the Gallery has the pleasure of exhibiting this work.

The Gallery of Fine Art, Edison Community College, and Henderson, Franklin, Starnes and Holt, P.A., are pleased to announce the 10th Annual Student Art Scholarship Competition, “Celebration of the Arts 2001.”  This mixed media exhibit of work done by the art students at Edison Community College opens Thursday, April 12th with a reception and awards ceremony in the Gallery between 5:00 and 7:00 p.m.  Henderson, Franklin, Starnes and Holt, P.A. sponsors the scholarship awards and organizes the local venues where the exhibit will be shown.

This event is open to the public at no charge.

This exhibit features the work of New York artist Stephanie Brody Lederman.  The exhibit includes more than 40 paintings completed in the 90’s.  Lederman’s work, in a sense, is a cronicle of our time and the universal story of our lives.  As in Gertrude Stein’s concept of “everybody’s autobiography,” Lederman offers, through the generalities of our daily sojourn, insights into our lives, our social interactions, and our intimate personal contact with our own individual realities.

Lederman’s work does not fit into an ‘ism, it does not rely on a movement or a category for it’s validation.  It is neither mainstream nor fashionable art. Her work is raw and fresh, yet sly in presentation and technical accomplishment. But most of all it originates at the core of her being.  Therein lies the power and the authenticity of her work.

Asked to comment on her work Stephanie responded in a recent statement, “because my art involves words and discernable images, I am working with concrete meaning in search of a metaphor that is richer than the simplicity of the images. I want to touch the viewer in a way that enables him or her to access sincere feeling and emotional truths ….. I feel more comfortable with the tender telling of taking a dog to the vet, than philosophical treatises on power and love.  I want to show the complexity and beauty of life, the poetry inherent in the ordinary.”  To that end words and images play off each other in the viewer’s mind and are filtered by the personal record each individual carries.  Stephanie touches on the ordinary to show us the sublime.

In his remarks for the exhibition catalog, B. H. Friedman, noted author whose work includes Jackson Pollock: Energy Made Visible,” points to a connection between Lederman’s work and what Jean Dubuffet identified as l’art brut (Dubuffet organized the first major public exhibition of this art in 1949.)  Friedman effortlessly takes us through Dubuffet’s definition of l’art brut and states in the catalog essay (referring to Dubuffet’s Collection de l’Art Brut,) “I assume that if Dubuffet had owned post-Cubist Picassos or dripped Pollocks, work he admired, they, too, would have been included.  And so would Stephanie Brody Lederman if Dubuffet had known her work. It fits well into that special category of cultural art inspired by raw art.”

Lederman’s work is whimsical, serious and unpretentious. It is so pure that the viewer need not try to enter her work. It is remarkably accessible once the viewer dismisses attempts at literal translation.  The imagery and text work together metaphorically to invite each participant on a journey. The experience is initiated by Lederman’s selections and completed by each individual, culminating in a completely unique experience for every viewer.

This annual favorite features the artwork of local and national artists that have been donated for auction to benefit ACT, INC. 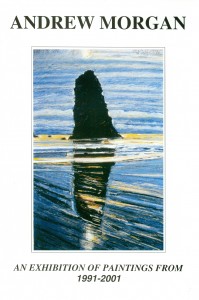 The Gallery of Fine Art, Edison Community College, is pleased to announce its next exhibit, Andrew Morgan: An Exhibition of Paintings from 1991 – 2001.  This exhibit of paintings by Andrew Morgan spans the past decade and includes mesmerizing views of the Oregon coast, vibrant still lifes as well as impressions of Florida and New Mexico.  Lush, vibrant and lyrical, these paintings, completed in the refined medium of oil bar, clearly show Andrew’s connection and commitment to still life and landscape.  More to the point though, they show his command of the medium, the picture plane and color as an expressive vehicle.

This exhibit, organized by the Gallery of Fine Art, will travel next to the Gulf Coast Museum of Art, Largo, Florida, then to the Lowe Art Museum, University of Miami, Coral Gables, Florida, and finally to Kennesaw State University Art Gallery, Kennesaw, Georgia.

The Gallery of Fine Art, Edison Community College, received a grant from the Richard Florsheim Art Fund for the publication of the catalog to accompany the traveling exhibit.

The Gallery of Fine Art at Edison Community College is pleased to present the recent work of Hollis Jeffcoat.  The 48 pieces in the exhibit were created between the years 1996 and 2001, and include drawings on paper and paintings on vellum, canvas and Plexiglas.

As a painter Jeffcoat’s lineage reaches back to the New York School that dominated the art world in the late 40’s and 50’s.  That is not to say that the artists and ideas that influenced her thinking were of that singular band in time. But, it does speak to the concerns that painters focused on by the time the abstract expressionists had over-powered the art world.  While that particular line of sight, from the New York School, can be drawn to a vast majority of artists in the late 20th century, it cannot be said of all that their work has the same integrity and focus.  Jeffcoat’s work is as clear and direct as painting gets.

Line, color, form and light are dominant concerns that Jeffcoat has been working with for decades.  In the most recent work, the use of materials has played a key role in achieving her goals, as they relate to the more formal aspects of art.  In particular the use of Plexiglas has become an important element or vehicle that directly impacts the luminosity Jeffcoat covets.  Line and color define and support the space but the luminous quality that brings full life to this work is controlled through the refined unification of materials and space. Hollis Jeffcoat is a painter’s painter.  Her work is clear, concise, direct and more to the point, hers alone. The plastics of art are the formative elements that serve as the vehicle by which we enter the work. But we would miss the point entirely if we were to stop there.  The paintings in this exhibit reflect the concerns of the artist and guide us to the inevitable conclusion that the spirit in art is our spirit, collectively.

Hollis Jeffcoat is a Fort Myers native and former Edison Community College student. In pursuit of her artistic goals she also studied at the Kansas City Art Institute and the New York Studio School.  Hollis was an instructor and administrator at the New York Studio School, Paris, France, and has also taught at Big Arts, Sanibel, Florida, SoCo Studio School, Fort Myers, Florida, as well as Edison Community College, Fort Myers, Florida.  Jeffcoat’s work is in the permanent collection of the Metropolitan Museum of Art, NY, NY, The Brooklyn Museum, NY, The Museum of Contemporary Art, Montreal, Canada, as well as the estate of Pierre Matisse.