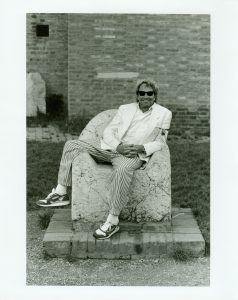 For over twenty-five years, the Gallery at Florida SouthWestern State College had an enduring friendship with world-renowned artist Robert Rauschenberg.  Exhibitions of Mr. Rauschenberg’s work started in 1980 and the Gallery was host to numerous world premiere showings, including the unveiling of the first installation of the 1/4 Mile or 2 Furlong Piece.  The following is a list of the fifteen Rauschenberg exhibitions held at Florida SouthWestern State College: 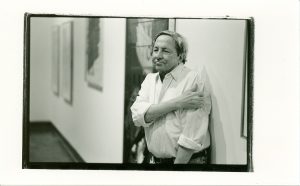 2004    Gallery of Fine Art at Edison Community College renamed Bob Rauschenberg Gallery. The dedication of the Gallery coincided with the exhibition, Scenarios from June 4 – July 11.

2005     January 7 – February 26:  A Quake in Paradise (Labyrinth) 1994
This was the first time the work was exhibited in the U.S.  The piece can be assembled in various configurations that viewers walk through and around, giving it a maze-like quality.

Source: Some of the exhibition information came from Rauschenberg / Art and Life, 2004, by Mary Lynn Kotz