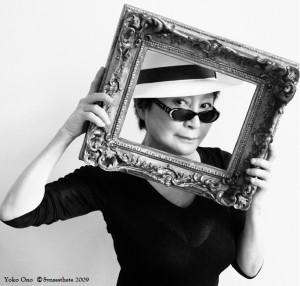 Among the earliest of artists working in the genre of Conceptual Art, Yoko Ono has consistently investigated the theme of peace and has invited those who interact with the work to play an active role in their creation and existence.  The exhibition YOKO ONO IMAGINE PEACE presents several of the artist’s most current works, re-imagined anew for the installation at the Bob Rauschenberg Gallery, Edison State College.

Four recent works, WISH TREE (1996/2014); IMAGINE PEACE MAPS (2003/2014); ONOCHORD (2003/2014); and IMAGINE PEACE TOWER (2006/2014) offer gallery visitors an opportunity to participate individually and collectively with the artist in the realization of the work.  Consider the world with fresh eyes as you stamp the phrase IMAGINE PEACE on the map location of your choice.  Attach your handwritten wish for peace to the WISH TREE, and this wish will be delivered to the IMAGINE PEACE TOWER in Reykjavik, Iceland, where it will shine on eternally, joining more than a million others previously collected.  You are also welcomed to beam the message “I Love You” to one and all using the ONOCHORD flashlights.  You may take an ONOCHORD flashlight and an IMAGINE PEACE button as a gift to you from the artist and carry these timeless messages out into the world.  As Yoko Ono has often observed: “A dream you dream alone is just a dream, but a dream we dream together is reality.”

PASSAGES OF LIGHT, a video that chronicles the conceptualization and construction of the IMAGINE PEACE TOWER, and reinterpretations of the works PARTS OF A LIGHTHOUSE and MEND PIECE, are also featured in the exhibition.  PLAY IT BY TRUST, a monochrome chessboard and all white-painted lawn-sized game pieces, invites visitors to experience a playful metaphor for the futility and confusion of all types of conflict – where differentiation between opposing sides is difficult if not impossible to distinguish, and the commonality of opponents is exposed.

The exhibition YOKO ONO IMAGINE PEACE was curated by Kevin Concannon and John Noga with the support and involvement of the artist.  The installation at the Bob Rauschenberg Gallery was configured in direct collaboration with Yoko Ono to reflect the Gallery’s mission and its role as a learning laboratory on the campus of Edison State College in Fort Myers, Florida.

Gallery exhibitions are sponsored in part by the National Endowment for the Arts, The State of Florida, Department of Cultural Affairs and the Florida Arts Council.  YOKO ONO IMAGINE PEACE is generously underwritten by: Trevett Capital Partners; Steven Hubbard and Carolann Swanson; Barbara Yeomans; and the Bob Rauschenberg Gallery Docent Helping Hand Fund.

“Yoko Ono Exhibit Kicks Off Season” in The News-Press by Charles Runnells (December 5, 2013) 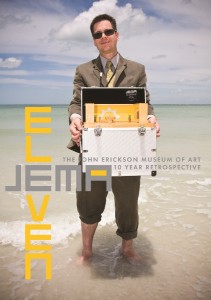 Chronicling a decade of highly innovative art projects and often unconventional installations by invited artists, ELEVEN: The John Erickson Museum of Art (JEMA) 10-Year Retrospective will mark its final day at the Bob Rauschenberg Gallery (and elucidate the enigmatic/numeric exhibition title) by closing to the public on JEMA’s ELEVENth anniversary.

Founded on July 25, 2003 by artist/curator Sean Miller with an “unauthorized” Grand Opening in the lobby of the Seattle Art Museum, The John Erickson Museum of Art was officially inaugurated with a guerilla-style art action. Befitting its diminutive architectural scale (each JEMA gallery is only slightly larger than a shoebox) – the entire celebratory event was clocked from start to finish at two-minutes in length. Conceived in the tradition of Marcel Duchamp’s “Boite en Valise” (his mini-retrospective in a suitcase) and Robert Filliou’s “Galerie Légitime” (an exhibition space in the artist’s hat), the portable JEMA galleries (most now safely housed in 16”x12”x9” aluminum carrying cases) have played host to site-specific and solo projects by a wide-array of well-established and emerging international artists.

While ELEVEN: The John Erickson Museum of Art (JEMA) 10-Year Retrospective at the Bob Rauschenberg Gallery will present more than twenty “archived” JEMA galleries – including those by Gregory Green, Arnold Mesches, Yoko Ono, Bethany Taylor, Sergio Vega and others, it will also premiere new works (or some not previously shown in the United States) by Jim Drain, Oliver Herring, Chip Lord, Tea Mäkipää, Andrea Robbins & Max Becher, Fluxus pioneer Ben Patterson and The Art Guys from Houston. This first-ever survey of artworks commissioned by the John Erickson Museum of Art, Elevenwill represent the largest gathering to date of artist/curator Sean Miller’s “location variable” JEMA galleries and be accompanied by his Next Chapter Spaces, JEMA Annex, JEMA Video Lounge, the Art Museum Dust Collection and new works from the JEMA Artist Dream Registry.

According to Bob Rauschenberg Gallery Director Jade Dellinger: “We are honored to be collaborating with our friends at the Samuel P. Harn Museum of Art and to have the opportunity to premiere this ambitious joint-venture in Fort Myers before travelling ELEVEN: The John Erickson Museum of Art (JEMA) 10-Year Retrospective to the University of Florida in Gainesville this Fall.”

The founder and director of JEMA, Sean Miller is a Florida-based artist/curator and an Assistant Professor at University of Florida with the School of Art and Art History and views the John Erickson Museum of Art as a generative art work.

As Kerry Oliver-Smith, Curator of Contemporary Art at the Samuel P. Harn Museum of Art/University of Florida views it, “Sean Miller’s remarkable JEMA project upends conventional ideas of the museum, artist and curator. He reinvents the museum by creating a series of miniature and mobile museums that occupy new realms of critical and literal space from site-specific sculpture and installation space to performance and web-based project. Each museum features a different artist and from there the project expands.”

Gallery exhibitions are sponsored in part by the National Endowment for the Arts, The State of Florida, Department of Cultural Affairs and the Florida Arts Council. Marketing of The John Erickson Museum of Art (JEMA) 10-Year Retrospective is generously underwritten by Southwest Florida Community Foundation.

“Itty Bitty Creations” in The News-Press’ Gulf Coasting by Charles Runnells (May 16, 2014)

In celebration of the 10-year anniversary of the renaming of the Gallery of Fine Art at Florida SouthWestern State College (formerly Edison State College), our Fall programming will focus exclusively on the enduring legacy and profound global (even “extraterrestrial”) impact of our namesake artist Bob Rauschenberg.  From October 22 through December 17, the Bob Rauschenberg Gallery will premiere RAUSCHENBERG: China/America Mix – the first solo exhibition of the artist’s work at the Gallery since his death in 2008.  However, we are also delighted to announce that the first ever “Space Art” object will be landing at FSW in the meantime with our installation: The Moon Museum (1969): Apollo XII’s Secret Art Mission (August 22 – September 27, 2014).

The Moon Museum (1969): Apollo XII’s Secret Art Mission will present the little-known Rauschenberg / Experiments in Art & Technology (E.A.T.) project that clandestinely sent and permanently sited original artwork by six artists on the lunar surface in 1969.  A postage stamp-sized, paper-thin multiple, the Moon Museum was the brainchild of New York sculptor Forrest “Frosty” Myers.  A group of the most significant artists of the time including John Chamberlain, David Novros, Claes Oldenburg, Andy Warhol and Bob Rauschenberg joined Myers in contributing individual drawings that engineers at Bell Laboratories transferred (using a then cutting-edge photo-reduction technique developed for micro-circuitry) onto a handful of identical ceramic wafers.  The first-ever “Space Art” object, one copy of the Moon Museum multiple was then surreptitiously attached to the Apollo XII lunar landing LEM 6, and has now, consequently, resided on the surface of the Moon for the last forty-five years.

As Rauschenberg’s artist-friend Forrest Myers has described it, “Darwinian evolution seemed to happen in fossil time, but seeing Man leave the Earth and step foot on the Moon was both instant and epic.”  Myers was inspired by the success of Apollo XI to propose sending art to the Moon – his art and the art of those artists he most admired.  Wanting nothing more than to put something soulful up where typically NASA had left detritus and hardware behind, nearly a half century later, The Moon Museum (with drawings by Rauschenberg, Chamberlain, Oldenburg, Novros, Myers and Warhol) is still a compelling art object and continues to resonate profoundly in the imagination.

Following the triumphant return of the Moon Museum from its first blockbuster presentation (an exhibition co-organized by the Bob Rauschenberg Gallery with support from the U.S. Department of State and National Geographic magazine) at the National Gallery of Art in Tbilisi, Georgia (former Soviet Union) last November, the Bob Rauschenberg Gallery at FSW will allow Southwest Florida visitors the rare opportunity to view in-person one of the few original Moon Museum (1969) ceramic tile multiples (along with vintage NASA press photographs, film shot by Apollo XII astronauts and related mission-flown artifacts).

“The Contemporaries host a Space Age Brunch at MFA to celebrate the Moon Museum and the kick off of their 2018 season” – (February 10, 2018) 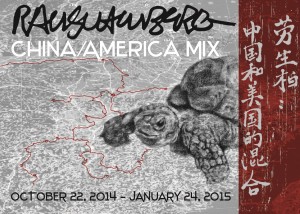 Lecture by Dr. Donald Saff: Wednesday, October 22, 2014 at 6-7pm in the Rush Library Auditorium
Opening reception in the Gallery from 7-9pm (with Musical Performances by Dickie Landry, Kat Epple and Sonic Combine)

Florida SouthWestern State College and lead sponsor FineMark National Bank & Trust is delighted to announce the first solo exhibition of world renowned artist Robert Rauschenberg since his memorial at the Bob Rauschenberg Gallery in 2008 and the first installation in more than a decade of his monumental 100 ft.-long Chinese Summerhall (1984) photograph. RAUSCHENBERG: China/America Mix is the artist’s sixteenth one-man show at the College (since the Gallery was founded in 1979) and celebrates the 10-year anniversary of the Gallery’s renaming and dedication in his honor.

Widely-acknowledged as one of the most important artists of the 20th Century, Rauschenberg is credited with pioneering the transition from European modernism to American pop art and was a local Lee County resident for nearly four decades.  His effect still looms large around the globe, but this is particularly evident in China.  Inspired by his 1982 visit to Jing Xian and his work at the ancient Xuan Paper Mill on his 7 [Chinese] Characters collages (included in this exhibition), Rauschenberg returned to China in 1985 to mount his Rauschenberg Overseas Culture Interchange (ROCI) exhibition at the National Gallery in Beijing.  Open to the public for less than three weeks, Rauschenberg’s ROCI/China show attracted more than 300,000 visitors and is still considered a seminal cultural event.  To this day, the most recognized Chinese artists acknowledge his great influence and broader impact in describing art in China “before… and after Rauschenberg.”

As the artist once noted, “ROCI [was] an attempt to create universal art, imbued with cultures of various peoples, in order to contribute to the cause of peace.”  “While photographing the environs,” according to Dr. Donald Saff, “a sense of China unfolded in the viewfinder of Rauschenberg’s Hasselblad.” He continued, “The enthusiasm of his working methodology was his diplomacy and his art was magic for the people’s spirit.”

The RAUSCHENBERG: China/America Mix exhibition will open to the public from 7-9pm on Bob Rauschenberg’s October 22nd birthday with musical performances by longtime friends Dickie Landry, Kat Epple and Sonic Combine.  A pre-opening lecture on “Rauschenberg in China” will be presented from 6-7pm by distinguished guest, Dr. Donald Saff (Founder of USF’s Graphicstudio and Artistic Director of Rauschenberg Overseas Culture Interchange/ROCI).

These events are open to the public, free of charge.  The first-come, first-served seating for the 6 pm lecture is limited.

With additional support from Stanton Storer Embrace the Arts Foundation

“Recalling how revolutionary and transcendent Bob Rauschenberg was on the 89th anniversary of his birth” (October 22, 2014)

“Getting to know Bob Rauschenberg the artist and ambassador of peace through R.O.C.I. Artistic Director Donald Saff”  (October 24, 2014)

“How a bit of trickery led to inclusion of a political poster in the ‘Chinese Summerhall’ 100-foot photo” (October 27, 2014)