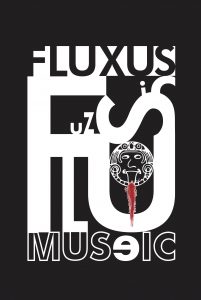 Florida SouthWestern State College is pleased to announce the opening of FluZUsic/FLUXUS MUSIC at the Bob Rauschenberg Gallery with a public reception on Friday, August 25th from 6-8pm.  An interactive and immersive installation with newly commissioned works by Yoko Ono, Geoffrey Hendricks, Alison Knowles and Philip Corner (who also provided the exhibition’s playful title), FluZUsic/FLUXUS MUSIC provides both an in-depth historical examination into this seminal art movement and a hands-on/participatory and sonic experience for visitors.

Most heavily inspired by the ideas of John Cage, Fluxus art often relied on chance to shape the outcome and actively involved the viewer. Fluxus compositions or scores for performances and events involved simple actions, ideas and objects from everyday life. Incorporating concrete poetry, visual art and writing, Fluxus performances were the embodiment of Dick Higgins’ idea of “intermedia”—a dialogue between two or more media to create a third, entirely new art form.  Yet, as many of the Fluxus artists had formal training in music, musical composition and performance (frequently involving the alteration, misuse or abuse of traditional instruments), this activity became a central focus.  Beginning with a series of festivals featuring concerts of experimental music and other avant-garde performance, Fluxus artists reacted against the commodification of art, its commercialization in the gallery system, and its static presentation in museums. While Bob Rauschenberg famously stated his interest in working “in the gap between art and life”, the primary goal of most Fluxus artists was to destroy any boundary between the two.  Founder George Maciunas stated that Fluxus was “anti-art,” to underscore the revolutionary mode of thinking about the practice and process of art while using humor to mock the elitist world of “high art” and to bring art to the widest possible audience.

A special preview Q. & A. and exhibition walk-through with visiting artist and FLUXUS pioneer Alison Knowles is scheduled the morning of Friday, August 25th at 11am.  An active participant in New York City’s downtown art scene and close collaborator of both John Cage and Marcel Duchamp, Ms. Knowles (like her fellow Fluxus colleagues) is noted for event scores and performances that rework the everyday into art – including visual, aural, tactile and often participatory elements.  Involved in sound since the late ‘60s, Knowles designed and co-edited John Cage’s Notations, a book of music manuscripts published by the Something Else Press.  Her 8 x 12 ft. “Bean Garden” (1975/2017) newly-constructed for FluZusic/Fluxus Music invites Bob Rauschenberg Gallery visitors the unique opportunity to walk through a platform of nearly two-tons of amplified great northern beans – as their sounds resonate with each step.

This exhibition is made possible by the generous support of the Stanton Storer Embrace the Arts Foundation. 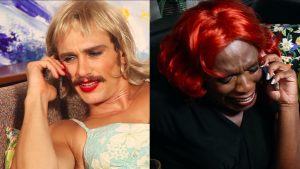 Florida SouthWestern State College is delighted to announce the opening of James FRANCO & Kalup LINZY: Collaborations at the Bob Rauschenberg Gallery with a public reception for the artists on Friday, April 7th from 6-8pm.  The first two-person/collective museum exhibition of these internationally-renowned artists, James Franco and Kalup Linzy will premiere several new projects while surveying their collaborative and individual photography, painting, multi-media works and related ephemera (including costumes and props used to create works on view).

James Franco is an Academy Award-nominated actor, director, author and visual artist who has worked across media to explore issues from adolescence, stereotypes and autobiography to society’s preoccupation with celebrity. He has had solo exhibitions at the Museum of Contemporary Art in Los Angeles, The Clocktower Gallery at P.S. 1 in New York, Peres Projects in Berlin, Gagosian Gallery in Beverly Hills and at the PACE Gallery.

Born in Clermont and raised in Stuckey, Florida, Kalup Linzy received his Bachelor of Arts degree and his M.F.A. from the University of South Florida in Tampa. In 2005, his participation in a group show at The Studio Museum in Harlem and a project at Taxter and Spengemann Gallery in Chelsea, led to a review in “The New York Times” by Holland Cotter that opened with the declaration that “A star is born…”  Playing multiple roles (often within a single work), performance artist, actor, director and vocalist/musician Mr. Linzy is the genre- and gender-bending star of video melodramas, which cover issues of race, politics, sexuality and family relationships. The recipient of numerous awards and recognitions, Linzy’s work has since been collected by institutions including The Museum of Modern Art/New York, The Studio Museum in Harlem, The Whitney Museum of American Art and The Metropolitan Museum of Art.  He has lectured across the country at institutions including New York University, the School of Visual Arts/SVA in NYC and Harvard University.

According to James Franco: “Kalup Linzy is a versatile performer and artist who uses multiple voices, personas and media in his work. But underneath all these different faces and forms there is a common and sincere longing for love, identity, and artistic purity… I first met Kalup when he gave a talk to the Columbia University graduate students for their visiting artist lecture series, which I had been crashing every week…  The day Kalup spoke, I had an epiphany.  I knew that he was going where I wanted to go.”

In 2010, Franco invited Linzy to develop a fictional character and to appear with him on the long-running and immensely popular TV soap opera “General Hospital” and thus began the broad series of collaborative artistic endeavors that are represented in this exhibition and continue to this day.

This exhibition is made possible by the generous support of the Stanton Storer Embrace the Arts Foundation.

“JAMES FRANCO AND KALUP LINZY’S ART EXHIBIT MIGHT MAKE YOU QUESTION YOUR SANITY, BUT IN A COOL WAY” – Eagle News (April 15, 2017) 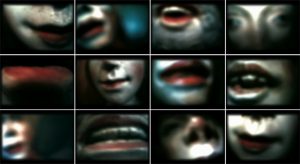 Florida SouthWestern State College is honored to announce the opening of ANN HAMILTON: PHORA at the Bob Rauschenberg Gallery with a public reception on Friday, January 20th from 6-8pm.  Occupying the walls (nearly floor-to-ceiling) with more than 120 unique stills captured by the artist from close-up video taken of the mouths of carved medieval figures at the Museum of National Antiquities in Stockholm, the silent, non-sentient, but color-saturated facial features appear reanimated by this immersive installation of digital images.  Initially conceived for the architectural context of la maison rouge in Paris, France, and inspired by two highly-symbolic locales:  the Bastille (as the voice of civic demonstration) and the Bastille Opera (as a demonstrative public voice). ANN HAMILTON: PHORA explores the origins of public speaking from the first forums to on-going political debate, and is opening on the day of the U.S. Presidential Inauguration.

Presented for the first-time with THE FIRST LINE (Sounds for Drawing) an experimental drawing project and participatory installation by Ann Hamilton and Andrew Deutsch, this component encourages visitors to take a “hands-on” role by contributing their own drawing in response to audio tracks played through a headset while a newly-commissioned composition featuring micro-loops of the artist’s voice is played aloud in the Gallery to provide further inspiration and a soundtrack both for THE FIRST LINE and PHORA.

As subject of solo exhibitions and large-scale installations at institutions including The Museum of Modern Art, NYC; the Guggenheim Museum, NYC; Hirshhorn Museum & Sculpture Garden, Washington, DC; Musée d’art Contemporain, Lyon, France; Stedelijk Van Abbemuseum, The Netherlands; Tate Gallery, Liverpool, England; and the Museum of Contemporary Art, Los Angeles; artist Ann Hamilton has been widely-celebrated for her site-sensitive, multimedia, participatory and performance-based work.  The official United States representative at the 48th Venice Biennale in Italy and the 1991 São Paulo Biennial in Brazil, Ms. Hamilton was recipient of the prestigious MacArthur “Genius Award” Fellowship and a NEA National Medal of Arts Award (presented at the White House by President Barack Obama in 2015).

This exhibition is made possible by the generous support of the Stanton Storer Embrace the Arts Foundation and the Institute for Electronic Arts/iea.

“Gaining an appreciation of ‘Phora’ by revisiting the original installation” – ArtSWFL.com (01-14-17)