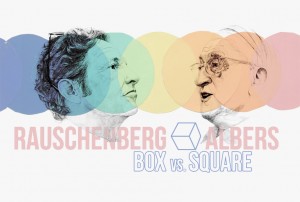 Florida SouthWestern State College is delighted to announce RAUSCHENBERG & ALBERS: Box Vs. Square at the Bob Rauschenberg Gallery (located on FSW’s Lee County/Thomas Edison campus). Opening with a public reception and performances by internationally-acclaimed electro-acoustic violist Martha Mooke and Sonic Combine on Friday, February 26th, RAUSCHENBERG & ALBERS: Box Vs. Square will be the first in-depth investigation anywhere of the once student-teacher relationship between these two great modern masters.

Robert Rauschenberg famously spoke of Josef Albers as his most important teacher, and (laughingly) acknowledged that Albers surely considered Rauschenberg his poorest student.  Of course, much celebrated for his own artistic production, Josef Albers’ pioneering research into the interaction of color (while teaching at the Bauhaus, Black Mountain College and later at Yale University) and legacy as an educator are at least as significant as the paintings and prints he created.  His teachings (and related publications) are still at the core of college art curricula and the subject of courses in every serious teaching institution (including Florida SouthWestern State College – where this exhibition will transform the Bob Rauschenberg Gallery into both an exhibition space and a classroom with hands-on workshops and lectures in conjunction with regularly-scheduled “Color Theory” course offerings during the Spring Semester.)

Widely-acknowledged as one of the most important artists of the 20th Century, Bob Rauschenberg is credited with pioneering the transition from European modernism to American pop art.  His influence still looms large around the globe and his work has been exhibited and collected by every major art museum in the world. Examined for the first time within the framework of the rigid “Homage to the Square” and “Interaction of Color” series of his most influential Black Mountain College instructor Josef Albers, RAUSCHENBERG & ALBERS: Box V. Square at the Bob Rauschenberg Gallery – is a curated exhibition that reconsiders the playful cardboard box works (his “Cardboards” and “Cardbirds”) of the internationally-acclaimed artist and Lee County, Florida resident Bob Rauschenberg.

As an artist who described himself as working in the ‘Gap between Art and Life’ and who often found inspiration and component parts for his paintings and ‘Combines’ by walking around his Lower East Side/New York City neighborhood block, Rauschenberg turned to cardboard boxes as a subject matter and raw/source material after unloading his belongings upon arriving permanently to Florida in 1970.  According to Bob Rauschenberg Gallery Director Jade Dellinger: “Trading the detritus of city life for the sunshine and sand of Captiva Island, the first series of works the artist made locally were the result and direct product of the abundant boxes used to transport his life and art from New York to his new beach-side home.  So, it is particularly fitting that these works be exhibited more than four decades later in the Southwest Florida context that inspired their creation.”

This project is sponsored in part by the Department of State, Division of Cultural Affairs, the Florida Council of Arts and Culture and the State of Florida & with additional support from Chico’s International

“Donald Saff and Lawrence Voytek to reminisce about collaborations with Bob Rauschenberg on April 30” from ArtSWFL.com by Tom Hall (April 27, 2016)

“Exhibit focusing on student-teacher relationship between Bob Rauschenberg and Josef Albers on view at FSW” from ArtSWFL.com by Tom Hall (March 3, 2016)

“Art exhibit to feature Rauschenberg’s art created after arriving on Captiva” in the Sanibel Captiva Islander by Meghan McCoy (February 17, 2016) 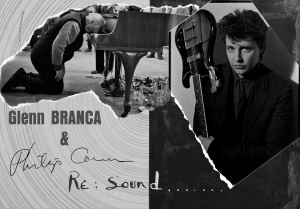 Florida SouthWestern State College is pleased to announce the opening of “Glenn BRANCA & Philip CORNER re: SOUND” at the Bob Rauschenberg Gallery (now running through October 22nd). The exhibition features the graphic/musical scores, Harmonic series drawings and artist-built instruments of Glenn Branca and Philip Corner. This immersive installation highlights two of the most influential avant-garde composer-performers alive today. Both explore the visualization of sound. The large-scale drawings of Branca (all created in 1985) investigate the geometry and mathematics of harmonics, while Corner’s site-specific work invites visitor participation and includes the world premiere of a recently re-discovered (never-before-exhibited) series of fifty-plus original hand-painted/collaged drawings that form the basis and score for the artist’s seminal “Metal Meditations” (1973-76).

An American composer, musician, music theorist and celebrated visual artist, Philip CORNER (b. 1933) now lives and works in Italy. A founding member of Fluxus, his legendary “Piano Activities” controversially dismantled/destroyed a piano when first performed in 1962 at the Festum Fluxorum/International New Music Festival in Wiesbaden, Germany while simultaneously helping to launch the movement. As the resident composer/musician with the Judson Dance Theatre in New York from 1962-64, Corner’s relationships with John Cage and Gallery namesake Bob Rauschenberg were decades-long. And, while Corner describes his “Metal Meditations” as “the culmination of many years of experience and experiment with the properties of resonant metal objects, intended for music or not,” it seems particularly appropriate that his installation at the Bob Rauschenberg Gallery includes “Strategic Structures” of aluminum and bell-grade brass designed, named and played by Rauschenberg (and collaborators Lawrence Voytek, Kat Epple and Bob Stohl) on their 1989 CD release of the same name.

Glenn BRANCA (b. 1948) is a New York-based composer and guitarist best known for his on-going experimentation with volume, alternative tunings, repetition and drone sounds. Inventor of the Harmonics Guitar, included in the exhibition, Branca was a founder of the No Wave movement during the late 1970’s with his bands The Static and Theoretical Girls. He has released more than fifteen full-length albums and has composed for experimental rock bands, electric guitar ensembles, symphonies, opera, ballet, choral and chamber ensembles, as well as for film, dance, theater, and installation art (including notable collaborations with conceptual artist Dan Graham and members of Sonic Youth). As David Bowie once observed: “Branca is truly one of the more mysterious and innovative composers of our times. He is able to create disturbing scenarios that somehow build upon a foundation of deeply moving, spiritual form. His music has been overlooked for far too long.” According to Bowie: “Not Minimalism, exactly… Branca uses the overtones produced by the vibrations of a guitar string. Amplified and reproduced by many guitars simultaneously, you have an effect akin to the drone of Tibetan Buddhist monks but much, much, much louder.”

On Saturday, July 9th at 1pm, artist Philip CORNER and his collaborator, the noted choreographer/dancer, Phoebe NEVILLE will be here at the Bob Rauschenberg Gallery at FSW, traveling from Europe to Fort Myers, to perform “Metal Meditations” (and related works) in the context of the exhibition. Sonic Combine will open and provide support.

Fort Myers, FL:  In celebration of Bob Rauschenberg’s enduring legacy and longtime commitment to both our local College and broader SWFL community, the Bob Rauschenberg Gallery at FSW is pleased to announce the extended loan and year-long public exhibition of the artist’s iconic triptych, Autobiography (1968).  On view beginning on the artist’s birthday and the final day of the “Glenn BRANCA & Philip CORNER re:SOUND” exhibition, Rauschenberg’s monumental three-panel lithograph Autobiography will be installed in the Humanities Hall (Building L) at the entry to the Bob Rauschenberg Gallery on October 22nd. The first fine art edition ever produced on an offset/industrial billboard printing press by the Broadside Art, Inc. organization (co-founded by Rauschenberg with designer Milton Glaser and others), the artist provided a comprehensive visual account in this work (a combination of images and words) of his personal and professional history just prior to making Southwest Florida his permanent home.

Highlighting seminal events from his Port Arthur childhood through his success in New York, Bob Rauschenberg’s Autobiography features a chart of the artist’s astrological sign, Libra; a full-body X-ray of his skeleton; a childhood snapshot of a family boating trip with his parents Dora and Ernest and NYC skyline images taken from his 381 Lafayette Street rooftop.  The third panel alone has an overlay of a map of Rauschenberg’s Texas Gulf Coast hometown and a dominant photograph of the youthful artist as choreographer and performer on roller skates in his 1963 production of the multi-media dance-work, Pelican. Autobiography (1968) is an artistic tour-de-force measuring more than 12-feet wide (when the three panels are displayed side-by-side) and is a fitting tribute as Florida SouthWestern State College celebrates the late artist’s birthday with this extended presentation. 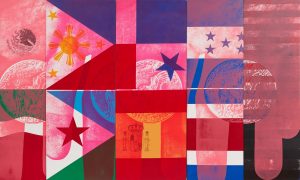 ** Press Preview lecture and walk-thru with the author of On The Road with The Ramones – Monte A. Melnick – and curator Sandra Schulman is scheduled for Friday, November 4th at 12 noon. **

Florida SouthWestern State College is delighted to announce Empire: An Arturo Vega Retrospective at the Bob Rauschenberg Gallery (located on FSW’s Lee County campus). Opening with a public reception on Friday, November 4th from 6-8pm, this ambitious survey runs through December 17th and will include guest lectures, performances and a panel discussion exploring Arturo Vega’s broader impact on popular culture and contextualizing his work as a visual artist. A collaboration with The Arturo Vega Foundation in NYC, Empire: An Arturo Vega Retrospective is the late Mexican-born artist’s first solo U.S. museum retrospective and features photography, collage and a number of iconic canvases from the artist’s Supermarket and Silver Dollar series (begun in the 1970s); his Flags and so-called “word paintings” from Insults and other series produced during the 1980s, ‘90s and aughts.

Escaping the repressive violence of an authoritarian regime under Mexico’s “perfect dictatorship” in the late ‘60s, Arturo Vega made his way to New York City to study English, philosophy and photography at the New School for Social Research in the early 1970’s. Having discovered Elvis as a child and later co-directing a touring production of The Who’s “Tommy” at the National University in Mexico City, Vega understood the revolutionary and transformative power of music, theatre/performance and art. While working on his first painting series of supermarket signs, he befriended members of The Ramones, a rock & roll band that would soon play their first show (and would decades later be inducted into the Rock n’ Roll Hall of Fame). Designing the Ramones’ ubiquitous logo based on the Great Seal of the United States, painting backdrops for their stage and creating a lighting scheme loosely adapted from Albert Speer’s Lichtdom to enhance their effect, Vega created visual imagery that defined the transgressive aesthetic of punk rock by co-opting and questioning symbols of power.

In numerous group shows since the 1970’s, Vega’s work has more recently been the subject of one-person exhibitions at CB’s 313 Gallery/New York City (1992), Raleigh Studios/Miami Beach (Curated by Sandra Schulman in 1994), Galería OMR/México, D.F. (2011), Casa Redonda, Chihuahua/Mexico (2012) and at Howl! Happening in NYC in 2015 and 2016. As Vega once said: “Art connects to the eternal – demanding fast changes and a reckless appetite for truth, justice and a better way of life.” Empire: An Arturo Vega Retrospective at the Bob Rauschenberg Gallery will draw parallels and explore interests shared by Arturo Vega and our gallery namesake. For Rauschenberg, “(Art was) a means to function thoroughly and passionately in a world that has a lot more to it than paint.”