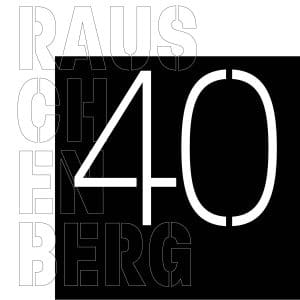 RAUSCHENBERG 40: The Fortieth Anniversary of the Bob Rauschenberg Gallery at FSW Exhibition

Related lectures, performance and special events TO BE ANNOUNCED.

Florida SouthWestern State College is delighted to celebrate the fortieth anniversary of the Bob Rauschenberg Gallery with a major solo exhibition of world renowned artist, longtime Lee County resident and gallery namesake, Bob Rauschenberg.  Four decades since the founding of the Gallery in 1979, this celebratory show “RAUSCHENBERG 40” is drawn from several prominent local collections and includes a number of never previously exhibited original paintings from the Gluts, Urban Bourbon, Anagrams (A Pun) and Waterworks series.

Beginning chronologically with the portfolio edition of “XXXIV Drawings for Dante’s Inferno” (1965) that was illustrated on his first extended visit to the Sunshine State’s Gulf Coast, Rauschenberg often joked that he had “gone through Hell to move to Florida.” Widely-acknowledged as one of the most important artists of the 20th Century, Rauschenberg is credited with pioneering the transition from European modernism to American pop art and has been the subject of recent retrospectives at the Tate Modern in London, Museum of Modern Art in New York and the San Francisco MoMA.  However, this is the first exhibition to exclusively survey works produced by the artist while living and working in Southwest Florida and to feature seldom or never-before-seen works that have remained in the community that he so proudly called home.

As Bob Rauschenberg often repeated and as this RAUSCHENBERG 40: The Fortieth Anniversary of the Bob Rauschenberg Gallery at FSW Exhibition makes evident: “Fort Myers is as small as your mind is.  It can be just as large as the world is.”

Please note:  This exhibition opens to the public during regularly scheduled hours and without a preview reception on Monday, August 26th.  Related lectures, performances and celebratory events will be announced throughout the duration of the show.

This exhibition is generously sponsored by Stanton Storer Embrace the Arts Foundation, The Beaches of Fort Myers & Sanibel and UBS.

“The Mind Behind the Rauschenberg Gallery” – FSW Compass (October, 2019) 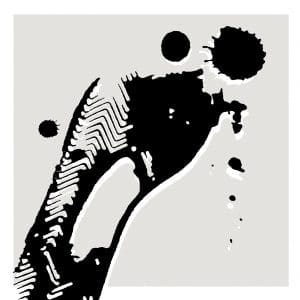 JOHN CAGE: STEPS & Other Works from the Mountain Lake Workshop
April 11th – July 27th, 2019
Opening to the public on Thursday, April 11th with a 6pm lecture by Mountain Lake Workshop founder Ray Kass and Laura Kuhn, Executive Director of the John Cage Trust at Bard College. (This discussion will be followed by a 7-8:30pm reception.)

Florida SouthWestern State College continues its celebration of the Bob Rauschenberg Gallery’s 40th anniversary by presenting JOHN CAGE: STEPS & Other Works from the Mountain Lake Workshop – an exhibition of visual art by the renowned artist-composer that will feature newly-licensed performances of “STEPS: A Composition for a Painting” and the world premiere of his recently rediscovered, never previously exhibited and monumentally-scaled masterwork – “New River Rocks & Washes” (1990). The show opens to the public on Thursday, April 11th with a 6pm lecture by Mountain Lake Workshop founder Ray Kass and Laura Kuhn, Executive Director of the John Cage Trust at Bard College and runs from April 11th – July 27th, 2019.

As a composer, music theorist, author and artist revered as a pioneer of indeterminacy in music, electroacoustic music, and non-standard use of musical instruments, John Cage was a leading voice of the post-war avant-garde, “my spiritual and philosophical soul-mate” as Bob Rauschenberg often proclaimed, and one of the most influential American composers of the 20th century. Perhaps best known for his 1952 composition “4’33”, a piece instructing the performer not to play their instrument during three timed movements over four minutes and thirty-three seconds, Cage proposed the revolutionary concepts that any sound may constitute music and that there is no such thing as silence.

A close collaborator through the 1950’s and ‘60’s while working with the Merce Cunningham Dance Company, Bob Rauschenberg later wrote, “John Cage [and] his work in every medium is a reward to all [and] will be for centuries.” The innocence and challenging audacity of his unique attitude, according to Rauschenberg, “created a labyrinth with no exit.” Often applying chance-based operations to his compositional process in an effort to eliminate aesthetic decisions, John Cage’s forays into visual art practice – perhaps best represented by his experimentation at the Mountain Lake Workshop – employed many of the same techniques. As collaborator, friend and Mountain Lake Workshop founder Ray Kass reflects, “Cage didn’t adhere to accepted aesthetic rules and patterns for the construction of works of art; he deliberately eschewed the idea that art is created solely through personal taste manipulating elements of visual form.”

Through the very recent “rediscovery” of John Cage’s seminal 8.5 x 28 ft. “New River Rocks & Washes” (1990), Bob Rauschenberg Gallery at FSW visitors will be given the extraordinary opportunity to be the first to publicly view this monumental masterwork – which until now was unidentifiably crated and in storage for nearly three decades. As Dr. Laura Kuhn (Executive Director of the John Cage Trust at Bard College) succinctly notes, “One cannot overstate the importance of John Cage and his work, and its impact on 20th century music, art, and culture.”

This exhibition is made possible through a partnership with the Longwood Center for Visual Art at Longwood University and presents excerpts from “Rural Avant-Garde: The Mountain Lake Experience” (an exhibition funded in part by the National Endowment for the Arts). We are deeply grateful to LCVA Director Rachel Ivers and Curator of Exhibitions Alex Grabiec; the staff of the Maryland Institute of College of Art/MICA; as well as to Sean Mooney, Chief Curator at the Rock Foundation, and the Adelaide de Menil & Edmund Carpenter Collection for essential loans and critical assistance with the preparation and installation of these seminal works. Our thanks also to Gene Caprioglio at C.F. Peters Co., Laura Kuhn and Ray Kass for their inspiration, participation and permissions granted.

This exhibition was generously supported by Bob Rauschenberg Gallery friend and docent Darilyn Alderman and with a grant from The Beaches of Fort Myers & Sanibel.
For additional information please call: 239-489-9313.
Visit us on Facebook, Instagram and YouTube.

“Experimental composer and artist John Cage will be featured in an exhibition at the Bob Rauschenberg Gallery” – Orlando Weekly (March 29, 2019) 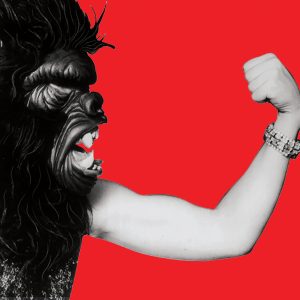 An internationally-renowned feminist advocacy and art collective, the Guerrilla Girls maintain anonymity while confronting and addressing systemic problems of gender and racial parity in the art world.  Attacking art institutions for discriminatory and inequitable practices on their own gallery walls, the Guerrilla Girls have designed a participatory chalkboard installation for visitor “complaints” and covered the Bob Rauschenberg Gallery floor-to-ceiling with an immersive selection of the group’s most notable public art/protest poster campaigns.

“Our anonymity keeps the focus on the issues, and away from who we might be.”  As the Guerrilla Girls readily acknowledge: “We wear gorilla masks in public and use facts, humor and outrageous visuals to expose gender and ethnic bias as well as corruption in politics, art, film, and pop culture.  We undermine the idea of a mainstream narrative by revealing the understory, the subtext, the overlooked, and the downright unfair.  We believe in an intersectional feminism that fights discrimination and supports human rights for all people and all genders.”

The subject of recent retrospectives in Europe and a traveling U.S. museum exhibition (Guerrilla Girls: Not Ready To Make Nice) and as guests on The Late Show with Stephen Colbert, the Guerrilla Girls have been speaking up and speaking out to demand change for more than three decades.  According to Frida Kahlo (a Guerrilla Girl who adopted the late, great Mexican artist’s name as a nom de guerre in her honor): “Wearing this mask gives you a certain kind of freedom to say whatever you want… [If] you’re a little afraid to speak, put a mask on…  You won’t believe what comes out of your mouth!”

This exhibition and billboard project is made possible by the generous support of the Diamond District and The Beaches of Fort Myers & Sanibel.