Florida SouthWestern State College is pleased to present an immersive, new multi-media installation, Dave Muller: Everything Sounds Good Right Now at the Bob Rauschenberg Gallery from February 20 – May 2, 2015, in addition to an artist-designed billboard project on U.S. Hwy. 41/Cleveland Avenue (near Page-Field Airport).  Internationally-acclaimed, Los Angeles-based artist, DJ and record collector Dave Muller combines his signature large-format paintings on paper, three-dimensional works and audio kiosks (playing recorded music from the artist’s extensive archive of almost 350,000 songs) with an enormous wrap-around wall painting created site-specifically during a two-week residency on the Lee County/Thomas Edison campus of FSW.  In conjunction with the exhibition, Dave Muller (much like Yoko Ono in 2014) unveils a billboard that serves the dual function of an original public artwork and as a means for announcing the show.

Colorfully composed of dense green grasses, exotic flora, fungi, lush tropical vegetation and rock formations, Dave Muller’s 225 ft. hand-painted mural in the Bob Rauschenberg Gallery culls imagery from nature to create a landscape providing a backdrop for framed drawings of LP “spines”, album covers and compact discs representing the musical tastes of friends, family and the artist himself.  Providing a soundtrack for the experience, the artist has sited six “listening stations” – organized chronologically by decade throughout the Gallery – to present a parallel timeline.  Essentially, the history of “recorded popular music” (beginning with Thomas Edison’s invention of the phonograph) becomes an audible representation of “culture” in direct dialogue with the forest of plant-life (“nature”) that transforms the Bob Rauschenberg Gallery and envelopes the room.

The subject of a major monograph Dave Muller: I Like Your Music I Love Your Music published by J.R.P. Ringier in conjunction with a retrospective at the Museo de Arte Contemporaneo de Castilla y Leon/MUSAC in Spain, the artist has had numerous solo exhibitions at institutions including the ICA/Boston, San Francisco Museum of Modern Art, CCS Museum of Art/Bard College and the Armand Hammer Museum of Art/U.C.L.A..  Represented by Blum & Poe Gallery (Los Angeles), Dave Muller was selected to inaugurate the gallery’s new Tokyo space with a solo installation in September.  His work is featured in the Permanent Collections of the Whitney Museum of American Art, Museum of Modern Art (MoMA/New York), Solomon R. Guggenheim Museum and San Francisco Museum of Modern Art.

With majority of the works on loan to FSW having been first presented in Dave Muller: Rock ‘n’ Old at the Art & Culture Center of Hollywood, we gratefully acknowledge and extend a special thank you to curator Jane Hart for allowing us to work with the artist to re-envision, re-title and expand this project for the Bob Rauschenberg Gallery at Florida Southwestern State College.

These events are open to the public, free of charge.  The first-come, first-served seating for the 1 pm lecture on February 21st is limited.

“On view now through May 2 is ‘Dave Muller: Everything Sounds Good Right Now’” from ArtSWFL.com by Tom Hall (March 31, 2015) 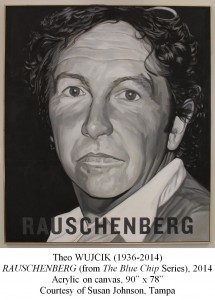 The Bob Rauschenberg Gallery at Florida SouthWestern State College is honored to announce the opening of our much-anticipated Summer show, “THEO WUJCIK: Artist’s Artist” on Friday, May 29 from 6-8pm.

The focus of a 10-year retrospective at FSW in 2012, the late artist Theo Wujcik’s current exhibition combines his final group of large-scale paintings (the so-called “Blue Chip” Series) with work in a variety of media created with fellow artist Bob Rauschenberg as his primary subject.  Representing the culmination of exchanges originating in the 1970’s between Wujcik and our Gallery namesake, “RAUSCHENBERG (Blue Chip Series)” (2014) was completed in Wujcik’s final months of life – while battling cancer.  The last portrait of Rauschenberg in a small series of editioned prints, silverpoint drawings and paintings included in this exhibition, this “Blue Chip” series canvas is featured alongside Wujcik’s brightly-colored interpretations of Jim Rosenquist, Takashi Murakami, Damien Hirst, Jeff Koons and numerous other artist-colleagues and friends.

Theo Wujcik moved from Detroit, Michigan to Tampa, Florida in 1970 – the same year that Bob Rauschenberg relocated his life and art to Captiva Island.  Wujcik, a celebrated artist and Tamarind Lithography Workshop-trained Master Printer, had been recruited by USF Graphicstudio founder Donald Saff to apply his many talents in the collaborative environment of the then budding editions atelier and, shortly thereafter, to share his knowledge by teaching Art at the University of South Florida.  Much loved and respected by all who knew him, Wujcik’s influence on students over decades and within his community and the region was profound.  Like Bob Rauschenberg, Wujcik’s original works are represented in the Permanent Collections of major institutions including the Museum of Modern Art and Whitney Museum of American Art in New York, the Chicago Art Institute, San Francisco Museum of Modern Art, Los Angeles County Museum of Art and The National Gallery of Art in Washington D.C.  They have been featured in exhibitions worldwide – including both solo and group shows at the Bob Rauschenberg Gallery at FSW.

“Remembering Tampa artist Theo Wujcik on the first anniversary of his death” from ArtSWFL.com by Tom Hall (April 1, 2015)

“Theo Wujcik exhibition at Bob Rauschenberg Gallery opens May 29” from ArtSWFL.com by Tom Hall (May 22, 2015)

“‘Artist’s Artist’ exhibition compels out presence, not once, but multiple times” from ArtSWFL.com by Tom Hall (June 13, 2015)

“Theo Wujcik was within five degrees of Robert Rauschenberg” from ArtSWFL.com by Tom Hall (June 15, 2015) 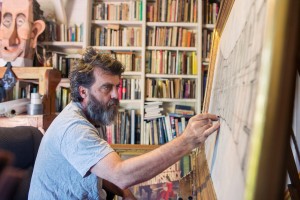 Los Angeles-based, internationally-acclaimed artist, Wayne White won three Emmy Awards for his set design and puppeteering on the landmark children’s TV show Pee-wee’s Playhouse, creating iconic characters including Randy, Cool Cat, Chicky Baby and Dirty Dog.  The subject of a 2012 feature-length documentary Beauty is Embarrassing, directed by Neil Berkeley and a 382-page hardbound monographic book designed and edited by Todd Oldham, Maybe Now I’ll Get the Respect I So Richly Deserve, Wayne White will be in residence at Florida SouthWestern State College for a week in advance of his show to work with FSW students to create a super-sized puppet/sculpture of Lee County resident artist and Gallery namesake Bob Rauschenberg.

In addition to his newly commissioned Bob Rauschenberg puppet/installation and related opening night performance, the exhibition Wayne WHITE: Here Comes Mr. Know-It-All will also include a selection of the artist’s now iconic and often “laugh-out-loud”-humorous “Word” paintings and a series of recent watercolor drawings and collages (on subjects including local environmentalist, author and political cartoonist Ding Darling) produced during Wayne White’s month-long Robert Rauschenberg Foundation Residency on Captiva Island in 2013.

As the artist reveals, “I’ve always had the do-it-yourself approach.  I grew up in this blue collar family and didn’t have a lot of toys, so you had to make your own fun.  Building forts out of sticks and scrap lumber – that’s where I learned the joy of making something from nothing.”

“(Put your hand inside) the puppet head” in Florida Weekly by Nancy Stetson (September 16, 2015)

“Wayne’s World at the Rauschenberg Gallery” in Ft. Myers (September-October 2015)

“Next exhibition at Bob Rauschenberg Gallery to be ‘Wayne White: Here Comes Mr. Know-It-All’” from ArtSWFL.com by Tom Hall (August 13, 2015) 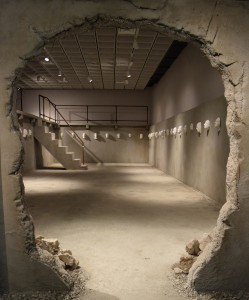 Florida SouthWestern State College is pleased to announce an ambitious new exhibition by New York artist Keith Edmier at the Bob Rauschenberg Gallery (located on FSW’s Lee County/Thomas Edison campus). Opening with a lecture and public reception on Saturday, December 5th, Keith EDMIER: Edison Impluvium is a site-specific, full-scale sculptural recreation of the historic c.1910 concrete swimming pool (located on the nearby property of the Edison-Ford Winter Estates) and will include the first-ever exhibition in Florida of the late, great inventor Thomas Edison’s “full-head” plaster-cast death mask.

Immersing visitors in a haunting (even tomb-like) hall of monochrome faces, the cementitious interior walls of the “swimming pool” sculpture (sans water) are adorned with forty-eight original plaster life masks. Many created by Edmier personally – making molds directly from the faces and bodies of his subjects, these “casts” are a physical record of time and include “self-portraits” of the artist as a teenager; in his 20’s and most recently as a middle-aged man in his late 40’s. Keith Edmier’s parents (Tom and Beverly) are memorialized alongside a chronological “who’s who” of the artist’s friends, actors, comedians, musicians and various subjects from his personal life and work history (including “life masks” of Farrah Fawcett, Michael J. Fox, Charlie Sheen, David Bowie, former studio-mate Matthew Barney and numerous others). According to the artist, “Edison’s Fort Myers pool is reimagined as an ancient ruin and references both the Roman Republic-era idea of life casts as ancestral masks and the water basins (known as impluviums) in the atriums of houses like those found in Pompeii.”

About the Artist: Keith Edmier was born in 1967 on Chicago’s South Side and grew up in the suburb of Tinley Park. At age 17, Edmier moved to Los Angeles to pursue a career in the film industry creating special make-up effects. His first job was working for Rick Baker on Michael Jackson’s Caption EO (which was directed by Francis Ford Coppola). He then worked for Chris Walas on David Cronenberg’s remake of The Fly, which won an Academy Award for best make-up in 1986. Edmier briefly attended The California Institute of the Arts/CalArts (studying under the influential artist Mike Kelley), then continued to work in the film business throughout the rest of the 1980’s, supervising effects for films including Bride of Re-Animator, Barton Fink for Joel and Ethan Coen, and the television series Freddy’s Nightmares.

In the beginning of 1991, Edmier moved to New York City to work as a fine artist. He had his first solo show in 1993 at the Friedrich Petzel Gallery. He has exhibited extensively since – including solo exhibitions at the USF Contemporary Art Museum/Tampa (curated by Bob Rauschenberg Gallery Director Jade Dellinger), the Los Angeles County Museum of Art, the Andy Warhol Museum, and major mid-career surveys at the CCS Bard Hessel Museum of Art, New York and De Hallen Haarlem/the Frans Hals Museum, The Netherlands. His work is in numerous private and public collections including the Walker Art Center, Minneapolis; Hessel Museum of Art/CCS-Bard College, New York; San Francisco Museum of Modern Art; The Denver Art Museum; The Israel Museum, Tele Viv and The Tate Gallery in London.

These events are open to the public, free of charge.  The first-come, first-served seating for the 6 pm lecture is limited.

“Channeling David Bowie: How one artist is paying tribute to the late singer” from W by Fan Zhong (January 13, 2016)

“‘Keith EDMIER: Edison Impluvium’ at Bob Rauschenberg Gallery” from ARTnews by The Editors of ARTnews (January 13, 2016)

“‘Edison Impluvium’ cannot be experienced vicariously; the proof is in the seeing” from ArtSWFL.com by Tom Hall (December 6, 2015)

“A Conversation with Keith Edmier: Storytelling as Life Cycle” in Sculpture magazine by Jade Dellinger (September 2015)

“Early Romans did not have air-conditioners, but they did have impluvia” from ArtSWFL.com by Tom Hall (November 26, 2015)

“Edmier collaborated with Farrah Fawcett on sculptural portraits of each other” from ArtSWFL.com by Tom Hall (November 24, 2015)

“Sculptor Keith Edmier has enjoyed a long preoccupation with masks and sculptural environments” from ArtSWFL.com by Tom Hall (November 18, 2015)